It is with great regret that I heard of the decision by the Trustees of the Rarer Cancers Foundation to close the charity down. The founder of the charity, Penny Wilson-Webb died in 2009 and her husband, Andrew, took it on. Sadly Andrew died, from a rare cancer, in June this year. Clearly the Trustees have found it too challenging to find a new CEO, or to drive a new direction for the charity. It will leave a gap.

I worked with both Penny and Andrew over the years. Penny’s drive and charisma opened doors and forced change. Andrew’s approach was quieter but no less effective. Perhaps his greatest achievement was the quiet lobbying of David Cameron when Leader of the Opposition which resulted in the Cancer Drugs Fund (CDF) soon after he became Prime Minister. Others contributed but Andrew opened the door.

Whatever the faults and failings of the CDF it saved lives. The new structure for the CDF within NICE is still too new to comment on. We have certainly seen accelerated access to new therapies recently and that is most welcome.

The Rarer Cancers Foundation evolved from a support and advocacy body into a support and information organisation, with Andrew continuing the advocacy. He worked on the steering groups of both the Cancer Campaigning Group and Cancer52, the two organisations which represent cancer charities. His insights also informed European initiatives on rarer cancers, often with information coming from patients which the professionals did not know. I worked with him on a number of ‘think tank’ events and he was a valued colleague, sharing many of my views.

He rang me some time ago to tell me about his cancer. Unidentified, despite the efforts of some of the best UK cancer brains and treatment from some of the best oncologists in the world, it was clearly a threat to his life. And so it proved, a bitter irony.

Now the RCF itself is to disappear.

Well now it’s out. Sarcoma is a natural cancer, caused by life, not by any environmental or human factors. Not by diet, smoking, poor exercise, pesticides, volcanoes, or even old age. Well, that’s pushing it a bit far I admit but the discovery from Johannesburg that a 1.7m old f 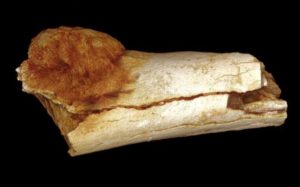 ossilised toe, from a hominid we cannot even guess what he or she looked like, showed evidence of osteosarcoma, opens the way for some speculation.

The majority of cancers are carcinomas and arise in visceral sites. A proportion are blood and lymph related – non-solid tumours. Another proportion are brain tumours. Then there are the mesenchymal tumours, cancers of connective tissue, sarcomas – about 1% of the total cancer incidence. We rehearse these differences frequently but we never speculate which of these cancers came first, doesn’t seem much point. Now we have some evidence. It’s far from conclusive but it leads to some more interesting thoughts.

Sarcomas can appear at any age and in just about any part of the body. The youngest patient I have known was 3 months old. He is now a healthy teenager. The oldest was 95, a delightful retired GP who quietly confided in me that he had done a ‘whoops’ surgery on a sarcoma back in the late 1940s. I have met patients with a primary tumour in the heart, having had a forequarter amputation, a facial rebuild from a skull tumour, and many like me who have lost a leg. None of these are regarded as typical of cancer.

Sarcomas can be difficult to treat. Getting good surgery is a priority but some sarcoma sub-types have a nasty habit of recurring even when all the post-surgical indications are good. Most are incurable at that stage although the pathway from incurable to terminal can be an exceedingly long one, as evidenced by me and many others. If we define cure as ‘dying from something else’ the cure rate improves significantly.

Sarcomas are relatively common in animals too. It is the most frequently diagnosed cancer in dogs and some of the tumour types which appear have strong similarities to human sarcomas. There are also variants of sarcoma which do not appear in humans, including transmissible tumours.

Tellingly sarcomas are more common in younger people that other solid tumours. At the time the Johannesburg toe was attached to a living being life expectancy would not have been great. Even if aggressive causes (human or animal) are ruled out what we would call natural causes would ensure that few, if any, lived much beyond two decades. Sarcoma could well have been the only solid tumour they faced. If that is true, other cancers are diseases of sophistication while sarcomas are diseases of life.

So where are we with treating sarcoma if surgery has not worked? We are far behind the game with targeted therapies. Immunotherapy is being worked on and first indications are uncertain. If diagnosed with unresectable sarcoma metastases a patient is still most likely to be offered doxorubicin as chemotherapy, a treatment that is in its fifth decade of use. With unpleasant side effects, about a 30% response rate and rapid relapse by the majority of responders it is a questionable treatment for many. Novel agents like trabectedin, derived from a sea squirt toxin, have value in extending life for some but not for all. Sarcoma is not seen as a priority for drug development even though great work is going on to define genetic characteristics which could open the way for new treatments.

The owner of the Johannesburg toe may well have died from lung metastases associated with the tumour on the toe. It could happen just like that today.

That kind of commentary applied to a more common tumour would be a widely heard clarion call for urgent action. However this is sarcoma, the ignored cancer, the boring 1.7m year old story.