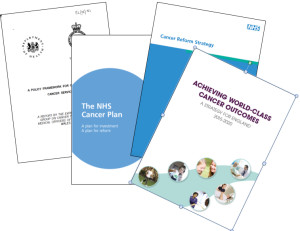 The new Cancer Strategy is a remarkable piece of work for its breadth and depth of detailing. This could, and deserves to be, as far reaching and valuable in terms of patient benefit as the Cancer Plan of 2000. If you look back to Calman Hine in 1995, through the Cancer Plan, then the 2007 Cancer Reform Strategy you get documents from very different times in the evolution of cancer care all of which help provide the foundations for the new Strategy. The 2011 Cancer Outcomes Strategy is probably best forgotten as rooted in post-election political nonsense.

The important thing about this plan is that it is grounded in well researched and understood realities. It is do-able and it can shift the quality of care upwards as well as handle the growing numbers of patients. The 2000 Cancer Plan had some lofty ambitions; the 2007 CRS trod into unfamiliar territory; this is going to put real buildings on the secure foundations these two pieces of work created.

The six headline priorities map out clearly some key targets and the Government cannot ignore the value that these offer.
A radical upgrade in prevention and public health. Smoking and obesity are the high prioritiy targets.
A national ambition to achieve earlier diagnosis. The ambition set out is that, by 2020, 95 per cent of patients referred for testing by a GP are definitively diagnosed with cancer, or
cancer is ruled out, and that patients get this result within four weeks.
Patient experience on a par with clinical effectiveness and safety. Improving the use of IT, making CNS more accessible, and making the National Cancer Patient Experience Survey an annual event.
Transformation in support for people living with and beyond cancer. By 2020 every person
with cancer should have a comprehensive plan that outlines treatment as well as post-treatment support and care. CCGs must commission appropriate End of Life care, in accordance with NICE guidelines and the Choice Review.
Investment to deliver a modern high-quality service. A plan for radiotherapy machines (linacs) covering upgrading and replacement. A permanent and sustainable model for the Cancer Drugs Fund. A national molecular diagnostics service to guide more personalised prevention, screening and treatment. Plans to address critical deficits in the cancer workforce.
Overhauled processes for commissioning, accountability and provision. Most treatment to be commissioned at population sizes above CCG level. By 2016, a network of Cancer Alliances should be established across the country to address service variation and support redesign.

I really like the way that the three strands of what was unfamiliar territory in 2007 now come together as key elements in the Strategy – early diagnosis, data and information, and survivorship. In 2007 we felt we were being bold tackling three completely new strands of of activity. NAEDI, NCIN and the National Cancer Survivorship Initiative all broke new ground and have achieved so much in seven years that their work is being embedded and taken further in the new Strategy.

The treatment chapters are probably the areas where most interest will be shown. Here the big hidden issues about workforce come to the fore strongly – not enough oncologists, radiologists, radiographers, CNS etc and a complete absence (until now) of any meaningful national workforce planning. The importance of new investment in linacs is something we have seen before and will, if there is continuing absence of planning, see again. These two areas are perhaps a shattering condemnation of the last five years – the absence of planning, the slow but obvious decay of service standards and the long term potential for patient harm. By contrast the big headline issue, high cost drugs, can be glossed over. The call for the Cancer Drugs Fund policy review to come up with a sustainable answer to the problem will resonate with NHS England.

At a personal level I am delighted at the new emphasis on palliative care and end of life care. I have long believed that palliative care and oncology practice were not separate disciplines and that this should be recognised clinically. It is in the strategy. Similarly those of us that work with local support groups will be aware that end of life care is far from integrated. It is usually community based, with lack of clear leadership, multiple provider agencies, leaving patients feeling as though they have been dumped. The message is about getting acts together.

For patients perhaps most striking priority is the call to be heard, to be supported through the NHS jungle, and to be given results as of rightn rather than when it is convenient. There is a strong emphases on research, other patient reported measures, and patient involvement. With CQC getting stronger in the regulatory mix (and a friend of cancer patients influential in this) plus the restoration of Peer Review, albeit with a new name, patients will have watchful allies as well. Stratified medicine is another patient friendly development. The full implications are not yet understood so the need for focus on the opportunity and being flexible to explore it is the message.

Talking of restoration. A National Cancer Team! Cancer Alliances! What a damning statement about the NHS reconstruction started by Andrew Lansley and continued by Jeremy Hunt. The National Cancer Action Team and Cancer Networks were only disbanded in 2013. The fact that they need reinventing barely two years later confirms it as the mistake many said it was at the time.

The Independent Taskforce, chaired by Harpal Kumar CEO of Cancer Research UK, should be congratulated on a remarkable piece of work. It was all done in six months, there was wide consultation,evidence was sought and analysed. The work is detailed and considered. If only every policy had this kind of report behind it.

Listening to a memorial service broadcast on radio it occurred to me how many demands we make on God. If we cut out the music, readings and eulogies the service was all about asking God for his mercy, compassion etc for those who had died and those who mourned. But God did not get a word in.

How often do we sit and listen to God? Do we ever sit and listen?
The readings help a bit – some previous wisdom gives us something to think on. But these are readings chosen by men from the writings of men. Do we doubt God so much that we have to fill the silence with our requests? Don’t get me wrong, I am not saying we shouldn’t make requests, I am seeking connections with God, indeed a relationship with God and one thing we learn very early in our life about relationships is that two-way communication is essential. Those who don’t stop talking often have hearing problems and use talking to mask their disability.

Viewed this way the memorial service was very worthy, caring for members of our society is important, but it was communication in one direction only. The suspicion is that everyone involved was deaf. God didn’t get a word in. The next question is, of course, did he hear the pleas, and did he try to respond? How do we know if he tried?

The truth is he might not have done. God didn’t get a word in; maybe he knew no-one would be listening. Faced with an unrelenting barrage of requests I think I would have gone for a cup of tea and waited for the noise to die down. That of course is the big mistake. I should not presume that God might act like a human. We make God in our own image far too often. Historically man’s books of religion tell us that his attributes are human and his behaviour human. It’s not like that at all.

Many attending that service or listening on the radio will have felt a tug at their emotions, have recalled their love for one departed, been distracted by a random thought, have reached a conclusion to some problem, or modified a firmly held belief during that service. It is that kind of way in which we hear God. He calls on our spirit, not on our ear drums. The hope is that through the music and the emotional involvement our spirit will open up and the peace of God will visit, will linger and hopefully create a lasting relationship.