Five events, two months, some important messages and valuable feedback. It has been a busy autumn this year. Preparing a presentation takes time so these trips have taken out a huge chunk of time, although to be fair two of these events did not involve a presentation. In one case I chaired a panel and another involved a dinner and a Board meeting. Each event also gave opportunities to meet and discuss matters with other patient advocates in both informal and more public settings.

Its worth looking at each of these events and seeing if we can draw some conclusions. Its also worth noting that a patient is often included in a programme a bit reluctantly so ensuring that what we say is well grounded in evidence that cannot be ignored is an important step to take. The character of the organisation running the event is therefore also an important background consideration.

The first of the five meetings was the ECCO Cancer Summit. ECCO has evolved as an organisation developing a clearer focus than hitherto on influencing policy within Europe. Within its structure it has a Patient Advisory Committee which makes significant contribution to the work which ECCO undertakes. The PAC is chaired by Ian Banks, a patient from Northern Ireland, and includes in its membership a varied and experienced group of advocates from all across Europe. The Cancer Summit was created to focus on some key issues and to agree how they should be represented. It also gave the chance to debate some issues at an earlier stage in their development, when clarity about what is involved is necessary. Patient integration in the Summit was excellent.

I co-chaired one of these debates with Dr Denis Lacombe of EORTC. The issue is the growth of short-term clinical studies resulting in regulatory approval and the loss of the scientific rigour which comes from Phase 3 Randomised Controlled Trials and long-term studies post-regulatory approval. The demand for evidence of value from Health Technology Appraisal (HTA) agencies which approve funding for national healthcare systems, and from patients wanting better quality information, creates a need for evidence from routine clinical practice (Real World Evidence – RWE) in the absence of prospective evidence. There are, as yet, no structures of any kind to support such studies, which take place ad hoc, have no consistent standards, are open to bias and dis-information.

What did our debate conclude? There is a need for industry, academic and regulatory organisations to work together to set RWE standards and create a route for accountability. EORTC’s Manifesto on Treatment Optimisation provides a strong foundation for a such collaboration. The ball is now in ECCO’s court to move this forward.

Then came ESMO, an event of such scale that describing it is almost impossible. Close to 30,000 delegates, up to 12 parallel conference streams, the largest cancer focussed exhibition in Europe, altogether astonishing. I followed streams on sarcoma, quality of life and PROs, patient involvement in clinical care and research, survivorship and trials methodology. Quite difficult prioritisng because there were many schedule clashes.

I spoke in a session on ‘Surviving a Cancer Diagnosis with a Good QoL’. Its a very open topic and the speakers covered a wide range of issues. A highlight was the work of Isabelle Lebrocquy from the Netherlands on cancer and employment. She has created a charity, oPuce, which helps get people with cancer being refused employment because of a cancer diagnosis, into jobs that they want.

The sessions on sarcoma had many important revelations – treatment of GIST, mifamurtide 10 years on, sorafenib for Desmoid tumours, radiation sarcomas and developments in precision medicine for sarcoma. The Patient Involvement session in the Nursing stream was very disappointing, poor quality information, nothing new or exciting, although there was an excellent case study from the Royal Marsden. The Patient Track in the programme included an excellent debate, in memory of Hans Keulen, about going the extra distance to extend life when terminal. Kathy Oliver chaired this superbly. Other standouts included a talk on Survivorship from Australia, and discussion on Fatigue – which revealed just how little we actually understand about this long-term side effect.

Then it was off to Rotterdam and the annual meeting of the European Society of Surgical Oncology (ESSO). The session I was speaking in here was led by Prof Gerard van Oortmerssen, my colleague on the board of Sarcoma Patients Euronet. I looked at Patient Involvement in the context of an emerging partnership with professionals, taking the most strategic view I could think of. For me the conference highlights were hearing sarcoma surgeons describing and debating key issues which impact on them. They are very different from the oncology issues which tend to get a wider exposure. Although I must say that when Andrew Hayes (Royal Marsden) asked me to (effectively) summarise from a patient viewpoint an excellent debate he had with Marco Fiore (Milan), with no notice, I really had to think on my feet.

A week later and it was off to Madrid for SPAEN’s tenth anniversary. SPAEN hosted a dinner for the meeting of the EORTC Soft Tissue & Bone Sarcoma Group (STBSG) to thank them for the support members have given us over those ten years, for presentations and discussions at meetings, round table consensus consultations, and many one-to-one advice and information calls. We also had a board meeting and set out some of the challenges we have for the coming years.

The Dinner was held at the Madrid Casino, a beautifully decorative building. 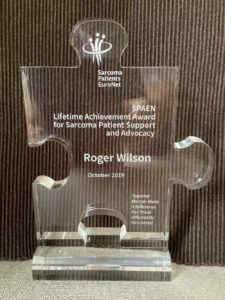 It featured the presentation of Lifetime Achievement Awards to four of our leading specialist doctors, Ian Judson (London), Peter Hohenberger (Mannheim/Heidelberg), Jean-Yves Blay (Lyon) and Paolo Casali (Milan). They have been unstinting with their support and advice during our ten years and this was a powerful way of saying thank you. They also embarrassed me with a similar award so I have included a picture of it.

Then came the NCRI Conference in Glasgow. The National Cancer Research Institute is the UK’s partnership of major cancer research funders and provides a forum for collaboration on strategies and developments which over nearly 20 years has proved very successful. An important element of its structures is the part played by patients and carers with ‘lived experience’ who come together in the NCRI Consumer Forum.

It is a conference dominated by science and advances in research, with crucial forays into advanced clinical issues where research and patients come together. The strong patient/carer presence is felt most as speakers address questions raised by their audience. Some of the toughest questions seem to come from patients and the challenges this can raise make this one of the most rigorous conferences there is. I had been asked to offer a patient view on developments in clinical trials and I faced the opposite of this situation with questions from two of the conferences earlier speakers with endless experience, Professor Mark Ratain (Chicago) and Professor Ian Tannock (Toronto) – very flattering.

The NCRI Consumer Forum held one of its three annual meetings at the conference and heard a exemplary joint presentation from Dr Helen Matthews (research biologist) and Max Williamson (a medical student) both of whom are cancer patients, about work they had done together. We also heard about plans to expand the role of the Consumer Forum from chair Emma Kinloch.

For the first time the Conference looked at a topical issue. Rather than a debate it was a discussion with presentations from four viewpoints to start it off. The topic was Assisted Dying and Cancer Care, chaired by Professor Sam Ahmedzai. I had the role of presenting a patient viewpoint, with the brief to be personal not detached or theoretical. It was an interesting challenge to take on and a privilege to be asked. The input from the audience was exceptional, with additional personal experiences from patients and doctors, a medical student explaining his reservations, and palliative care expertise from experienced nursing and medical professionals. This was a first for NCRI and indicates a way in which the conference might evolve valuable new approaches.

So, after seven weeks of seeming endless travelling and exploring the depths of airport terminals, conference centres and large hotels, how do I sum up what I experienced?

As a speaker I enjoyed the challenge of getting some very different messages across and I think my efforts were appreciated. As an attendee and delegate I learned a lot, especially about some of the advanced research now coming into clinical use – CAR-T cell being the obvious example. The evolution of clinical trials and adoption of RWE research is an issue which is becoming critical and needs greater attention. It was valuable to listen to other patients make presentations, and to hear presentations about patient issues, although I wish that presentations about patient involvement were given by patients, maybe together with a relevant professional, rather than by professionals alone. I was pleased with the advances being made in treating sarcoma, although this is slower than in most other cancers, something which may reflect the different underlying biology. And I was humbled to receive an award although I have to say it is nice to be ‘stroked’.

This was initially written to advise trainee oncologists on a training workshop.

There is good guidance available on how to construct a Patient Consent Information leaflet. This includes templates you can follow.  Have a look at the following:

This guidance from the UK has been developed through involvement of patients, ethical committee members and researchers.

You take your pick on formatting advice, however:

In the back of your mind:

Remember that the patient will only take one pathway through the study so complex issues like cross-over between arms in an RCT, or choice of successive therapies driven by response, need careful handling. A diagram can often help.

Ethics reviewers will want to see that you:

Every ethical board has its own view of what makes a good patient consent information sheet. Almost everyone is agreed that page after page of legal statements should be at the back and that the first two or three pages is all that a patient will actually take in. Much of the rest will be read by family or friends. These first few pages are where the heart of the story must be told, this is where to place the diagrams they may need to refer to, this is where contact details should be (probably repeated right at the end). My personal view is that the first 2/3 pages should be like an executive summary, this is followed by the full story, then the statutory material. At the very end is a repeat of the contact details so that they can be easily separated from the main document as an aide memoire.